From early AR prototypes to native 3D models, what was once a distant future is now a demanded feature for online stores.

A few years ago, when Facebook started exploring the usefulness of Augmented Reality features in its products, we jumped at the opportunity to assess how the technology involved could be useful to our clients, now that it was readily available (i.e. easier to build, at a lower cost).

Our MALVI team decided to test it out as soon as possible by creating 3D replicas of the products sold at one of our favorite brands, Cozykids. As an up & coming (at the time), childrens’ toys & furniture store it was the perfect opportunity to explore the capabilities of the technology, in the most useful—for the end user—environment.

One of the main issues with brands that sell furniture or interior design accessories is communicating effectively the dimensions of a product. Most of us, to some extent, have difficulty instantly visualizing how that beautiful new 140 x 220cm rug would look in our child’s bedroom, or even if it fits properly (maybe it’s too big, or it doesn’t really fit the room’s shape). We knew that assessments of this kind could prevent customers from converting, so we picked our battlefield.

Using Facebook’s early beta versions of Spark AR software we developed branded markers for each product, which could either be distributed in store to customers (along with other product information), or printed directly at home. By placing the marker at the desired spot inside a room and using an AR-capable device (such as their phone or tablet), they would be redirected to a Facebook link which brought that marker to life.

It practically acted as a sizing guide upon which we could overlay the chosen rug and, lo and behold, the user was able to see the product right in front of them, through their screen. This technology usage received some of the most amazing reactions to date, since the advantage was clear and indisputable: AR for products was a breakthrough.

Those being the early days though, it didn’t come without setbacks. Spark AR was great, but the hosted platform lacked flexibility. Facebook required submissions and long verification processes, feature changes were constant (as expected from a product in beta), the Terms of Use were a minefield, and the whole process required an extra step from the user, which kind of broke the efficiency of the entire attempt.

A customer had to either visit a store, or print a file. The first situation was rather effective, but not optimal for an online store (most of the online customers would never visit the physical locations anyway), whereas having to print something while browsing from a mobile device opened up a completely different can of worms.

Our enthusiasm for AR product displays remained unwavering, but the concept was short-lived. Updating new products was a pain, and the process required several touchpoints that made no sense, and drove up the costs of implementation.

By September 2018, the e-commerce giant had announced that it was entering the native AR product models arena, which made complete sense for a platform that had hundreds of thousands of merchants selling their goods all over the world. We rejoiced and patiently waited for the details to unfold, so that we could get our hands on it.

In the meantime the 3D Warehouse app proved to be really powerful and useful, but only kind of offered what was needed (since the initial support was only for iOS devices, which packed Apple’s AR Kit). The user effort barrier had been removed, but another one had replaced it in the process. While we could now get rid of environmental markers—the user was just asked to click on a prompt, the available devices from which said user would actually see the product were rather limited to one side (iOS, and its latest version at that). An improvement no doubt; but one that could still not justify the cost for most of our clients.

While we went through our period of sulking for the missed opportunities regarding a technology that was simultaneously within and out of reach, Shopify continued to try and figure this out. And by March 2020 they delivered. Big.

Finally, along with videos inside a product page, we were now able to display 3D models natively within the Shopify platform (which now supported both iOS and Android AR-capable devices) and it did so in a remarkably simple drag-n’-drop fashion. New models could be uploaded like any other product media (such as photos, or video); we just had to tweak the code for our product templates and it was as close to plug-n’-play as it could be. Our team could provide the required 3D files, the ecommerce manager would upload them like everything else, and that was it. Done.

Shopify’s native AR solution provides a straightforward option for users to visualize the products they want, in their own space 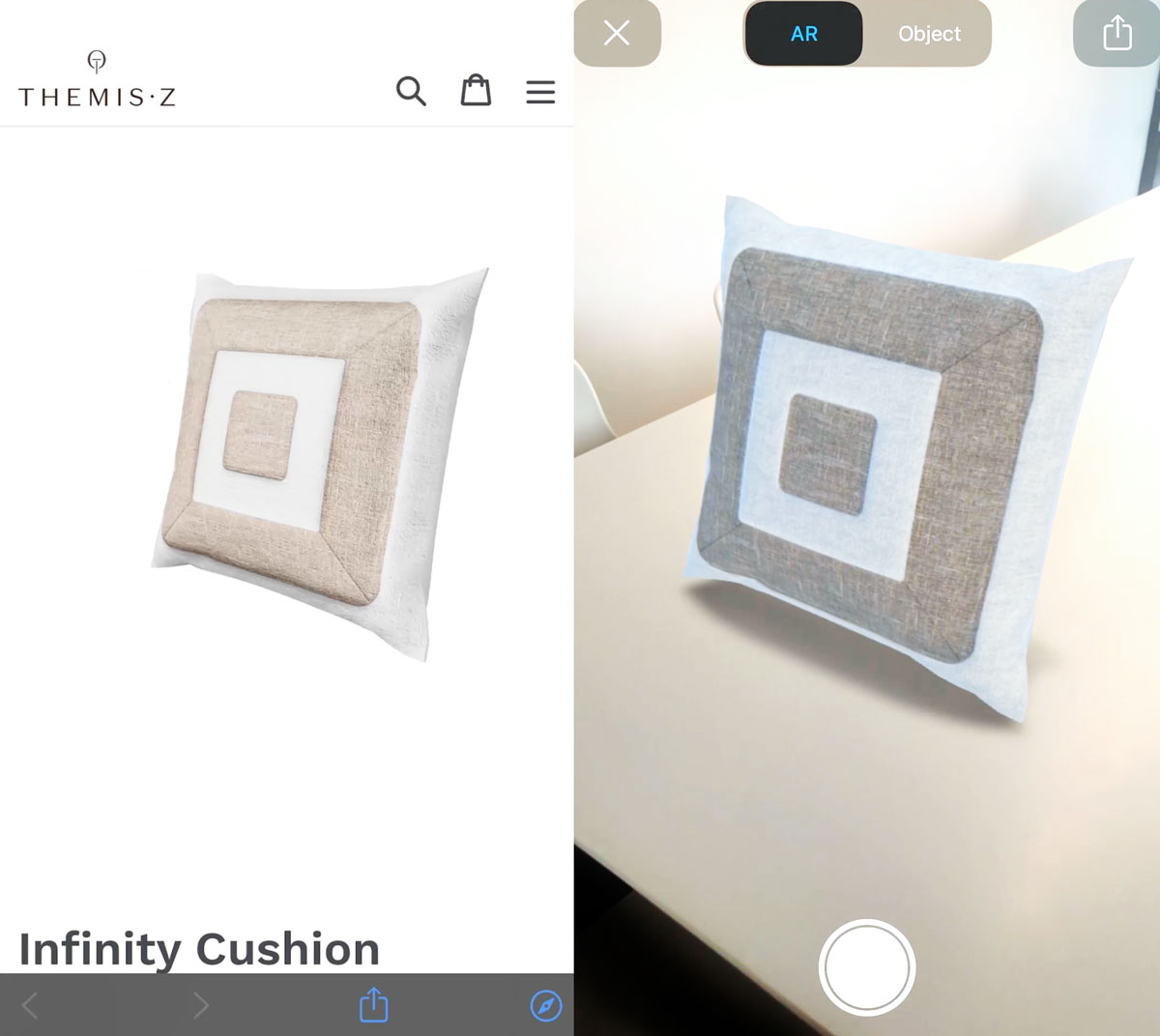 The time involved was drastically reduced, and the touchpoints were now as few as possible, meaning costs that were now reasonable for each product and an operation that could be scaled within a few days for each given brand.

So, yes, it was complicated and not really cost-effective at the beginning. It was a nice to have feature, which helped boost brand awareness, but in most cases was viewed as a gimmick.

But now, we’re way past that. There’s no excuse. 3D models that can be viewed through AR-capable devices (most modern smartphones that is) may not be groundbreaking any more, but they are definitely a must for any store that has visitors guesstimating dimensions, color combinations, and other factors that can affect their buying decisions. No more “will it fit in my bookshelf” and “I wonder if it will match my patterned, taupe drapes”. Just have them try it out.

There’s an old marketing adage in retail sales; if your product can make a customer pick it up from the shelf and hold it in their hand, then you’re halfway through the sale (which is somewhat true, they have a 50% choice of either placing it in their cart, or putting it back). Same goes for AR models: if they can picture it in their house, then they’re much more likely to buy it. And the reason is simple. They’ve now seen it. In their own environment. That image is now etched into their memory and it’s much more likely to make them come back to the product than any remarketing ad you’re bound to run.

Well, if you want a good, quality, 3d model with textures and lighting that bring out the best in your product and display it as close to the real thing as possible (and within the limitations set by Shopify), then there’s no way out of it. You have to pay for a studio or 3D artist to make you one. Prices may vary depending on experience, model complexity, texture detailing and other factors. 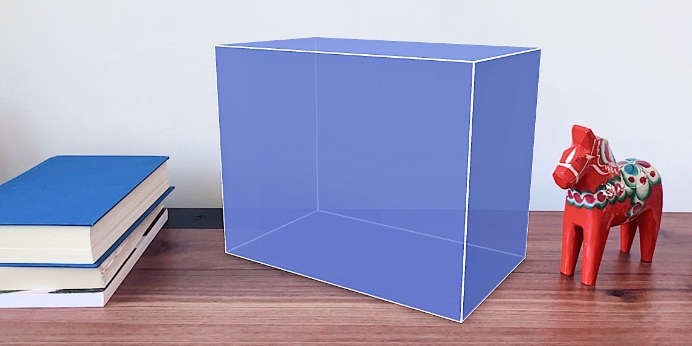 But is there an alternative option, I hear you asking? Well, there kind of is one. If you just want your users to be able to see a 3D volume with the dimensions of the product, but no actual texturing, modelling, or an actual 3D model, then Shopify has—somewhat—quietly launched Size.link, a really helpful online tool that helps you visualize dimensions in AR. You input the overall “boxy” dimensions of your product and you get a link for an AR display of said box. It’s a great (blue) gauge for whether the bulk of a product might fit in a given space (since it’s accurate within 1-2 cm from the real thing), but will not give you a real looking representation of the object in your room. It’s still much better than having your users guess your product’s dimensions though, which can still be very useful if you care to avoid unwanted returns and customer miscommunication. Best of all, it’s completely free.

As you can see, from free solutions to paid upscale models, there are no more excuses for not offering your customers the necessary tools for them to make an educated decision regarding your products. If you’re not looking into how 3d models and the available AR technology can help your store, then you can be sure that your competition is.

If you’d like to assist your store’s visitors by implementing AR-based shopping, we’re here for you. Just drop us a line and we’ll show you how you can instantly increase your product page conversions.